What type of warm-up optimizes swim performance? A new study from the University of Alabama, just posted in the Journal of Strength and Conditioning Research, ran a simple test with 16 NCAA swimmers. Each of them performed three 50-yard sprints, on separate days, with three different warm-ups:

But take a look at the individual results for the three conditions: 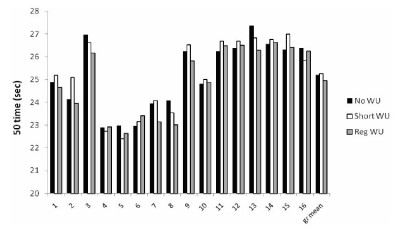 The researchers raise a very, very important point that is often neglected in sports studies:

It is important to note that swimmers compete individually and not as a “group mean”. Therefore, for swimming, it is important competitively to determine how each individual swimmer responds to different warm-ups.

Now, let’s not get carried away with this result. This was a small study, and the swimmers only did one 50-yard swim under each condition. It’s unlikely that no warm-up at all is really optimal. But it’s certainly worth investigating whether a shorter warm-up might do just as well, particularly for swimmers competing in multiple rounds of multiple events over a short period of time. And more generally, athletes and coaches should be open to the idea that different athletes respond differently to routines like warm-up. Maybe there’s an athlete in your group who would do better with an unorthodox warm-up. It’s worth doing some experimentation.

The answer to this question may seem obvious: as aerobic/cardio exercise, swimming should be essentially the same as running, biking, elliptical, and any other comparable sustained, rhythmic activity. But as this week’s Jockology column in the Globe discusses, there’s a surprising lack of research to back this claim up — and in fact some evidence that swimming doesn’t provide the same cardiovascular health benefits as other activities like running:

The problem is that your body gets a fundamentally different physiological challenge from being horizontal in water compared with being upright on dry land, thanks to the hydrostatic pressure and high thermal conductivity of water, according to Hirofumi Tanaka, director of the University of Texas’s Cardiovascular Aging Research Laboratory.

Dr. Tanaka reviewed current evidence for swimming’s effects on cardiovascular health in the journal Sports Medicine last year. He found solid evidence that regular swimming improves control of blood-sugar levels in the body, which reduces the risk of diabetes.

But several studies have found that swimmers tend to have higher blood pressure than other endurance athletes. A 2006 study by researchers at the University of Western Australia found that blood pressure actually increased in a group of sedentary older women after a six-month swimming program, possibly because water pressure keeps peripheral blood vessels more constricted than usual during exercise…[READ THE WHOLE ARTICLE]

The version the article that appears online is actually just a part of the package on swimming that appeared in the paper edition, which included sections on proper form, stroke analysis, and exercises to prevent shoulder injury. Unfortunately, those sections were graphics-heavy and difficult to format for the web — so I guess there’s still a reason to buy the hard-copy!

One of the sections that does appear online is Brent Hayden’s pre-race warm-up routine, which I found pretty interesting. I saw Hayden swim his first race of the Commonwealth Games yesterday, leading off the 4x100m freestyle relay final with Games record of 48.18 seconds. So how did that feel? Here’s his reaction after the race:

One thing at a time… Probably a good policy!

It was a good day at the pool for Canadian swimmers today. More specifically, it was a very good day for swimmers who train with coach Randy Bennett at the Victoria Swim Academy in B.C. Not only did Ryan Cochrane pick up the country’s first gold, in the 400m free; clubmates Julia Wilkinson and Stefan Hirniak picked up bronzes in the 200m IM and the 200m butterfly, and two others from the same group swam in finals — all this on the first day of competition at the Commonwealth Games in Delhi.

So what’s the secret? Hard work, obviously — but not just of the physical kind. After the race, Hirniak talked about a five-week stint of three swim workouts a day over the summer, and how the benefits were as much mental as physical:

I don’t think I would have paid much attention to that kind of comment a few years ago. But the more I read about the latest research into the nature of fatigue and limits of human performance, the more inclined I am to think Hirniak is right on the money with what he says here.

On an unrelated note, I was chatting with one of the Swimming Canada officials about the sports science team they’ve brought with them to Delhi. It’s an impressive contingent, including a couple of physiotherapists, a couple of physiologists, and a couple of biomechanics experts who are filming every lap of every race and producing a rush analysis for the swimmers and coaches every evening. I’m hoping to have a chance to hang out with some of these guys over the next week and find out more about what they’re doing.

The big news in swimming is that the buoyant polyurethane suits that have made a mockery of world records for the past 17 months — first Speedo’s LZR, and more recently the Jaked suit — have finally been banned by international authorities, effective starting in 2010. To put this in context:

In the Olympic individual events, only four world records remain from the pre-2008, pre-polyurethane era: the men’s 400- [UPDATE: uh, scratch that: Ian Thorpe’s record just went down] and 1,500-meter freestyles, and the women’s 100 breaststroke [that one’s gone too] and 100 butterfly [and so’s that one].

This is the right decision, and a big relief for anyone who wants the competition to be among athletes rather than the R&D arms of big companies.

[T]hey enabled swimmers without an ideal physique or impeccable conditioning to be more competitive. Squeezed into the corset-like suit, a muscled and stocky body is as streamlined as a long and lean one; a soft abdomen as effective as six-pack abs. “The thing that’s really hurt more than anything else is the whole suit situation has devalued athleticism,” [U.S. swim coach Dave] Salo said. “A lot of kids who aren’t in very good shape can put on one of these suits and be streamlined like seals.”

Of course, that doesn’t prevent some whining from athletes who like the suits:

“Basically, when we roll back, racers are going to hurt a lot more than they hurt currently, which is not something I’m looking forward to,” [U.S. swimmer Matt] Grevers said.

The big question now: what to do about the world records that have been set over the pact few years. After all, it could take a long time to eradicate them with normal suits.

It’s not just Usain Bolt — elite athletes have been getting bigger for the past century at a faster rate than the general population, according to researchers from Duke University in North Carolina. Yeah, I think we already knew that. But…

Futhermore, the researchers said, this pattern of growth can be predicted by the constructal theory, a Duke-inspired theory of design in nature that explains such diverse phenomena as river basin formation and the capillary structure of tree branches and roots. (www.constructal.org).

Apparently, the size of athletes illustrates some deep underlying truths about patterns in nature, as described in this Journal of Experimental Biology paper. Maybe, maybe not — it didn’t make a lot of sense to me. What I did find interesting was the data set they dug up for 100-metre world-record setters in swimming and running:

Specifically, while the average human has gained about 1.9 inches in height since 1900, Charles’ research showed that the fastest swimmers have grown 4.5 inches and the swiftest runners have grown 6.4 inches.

There’s been a lot of talk about how Usain Bolt’s otherworldly sprint times might be explained by the fact that he’s one of the first very tall men (6’5″, according to the JEP paper) to master sprinting. The second-tallest world-record holder is, not coincidentally, the second-fastest man, Asafa Powell, at 6’3″. This paper makes some interesting arguments about why this should be so, based on the scaling of horizontal and vertical forces in locomotion. It’s obvious to everyone why basketball players are almost all enormously tall — but the same forces appear to be in play, though less obviously, for runners and swimmers.