Marathoners are getting faster — that’s no secret. Here’s the progression of the fastest men’s marathon in each year between 1969 and 2010: 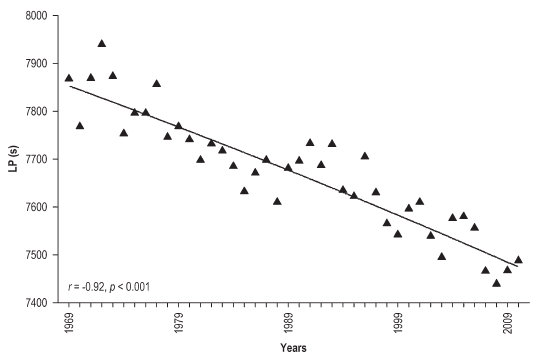 But looking at the leading time is a somewhat narrow approach, since it just reflects the freakish talents of one individual in each year. So here’s data, from a new analysis by researchers from the University of Milan in the Journal of Strength and Conditioning Research, showing the average of the top 200 times for the same time period:

So the basic trends are similar, but not identical. Look at the last three years, for example. From the top time, you might think marathoners are getting slower; but the second graph shows clearly that — as anyone paying attention to the marathon lately can attest — the depth of fast performances has been increasing steadily and sharply. I’ll bet the 2011 numbers will continue that trend.

The average data also shows a few inflection points where the rate of improvement has changed. There was rapid improvement until 1983, then a leveling off until about 1997; decrease again until 2003, then a little hitch for a few years, and now steady decrease again.

So what explains the changes? We can speculate about the role of money, science, and training… But as Amby Burfoot pointed out in his take on this study, it’s hard to get away from this stat:

6 Replies to “Men’s marathon: how much faster is it getting, and why?”