That’s a pic from Papua New Guinea, where Lauren and I went hiking a couple of months ago. It was a fantastic trip, and my article about it is now available on the New York Times website:

[…] We had been warned over and over to prepare ourselves for two things: mud and hills; hills and mud. While the highest point on the trail is a modest 7,000 feet, the accordionlike ridges and gullies mean you climb and descend more than 20,000 feet in total.

But it’s not the vertical that can break your spirit, we soon realized, it’s the horizontal — seeing the trail almost within arm’s reach in front of you, then realizing that you have to clamber 200 feet down a steep and muddy decline, wade through a stream or tiptoe across a slender log, then haul yourself back up the other side on wet clay. [READ THE WHOLE ARTICLE]

A few more pics from the trip: 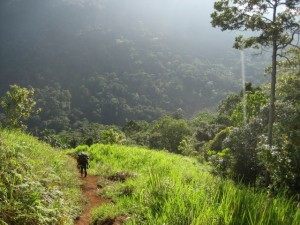