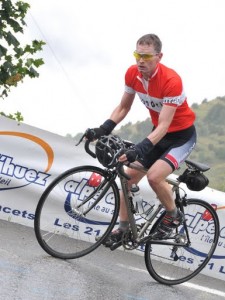 In my experience, a road ride has the same psychological benefits as described for spinning – provided I am riding with people who are better than me. In that case, my effort is dictated by factors outside my control: the wind, the gradient, and the whims of those making the pace. I often find myself working harder than I thought possible.

The effects of riding with people of my own ability are more variable; they depend on the group size, pace and length of turns on the front. This type of ride is characterized by brief intervals of hard work on the front followed by longer intervals at lower intensity. At a given level of average power, this is harder work than maintaining a steady power output. But generally, one can maintain higher average power on one’s own. Under different circumstances, one effect can win out over the other. The psychological aspect of the group is diluted because at the points of highest effort one is making the pace oneself instead of striving to match that of another.

A group ride among peers is most like spinning when it is on a climb; in that case, the benefits of following are minimized and small differences in ability are magnified. Usually every rider except one is working harder than he would otherwise. However, it is psychologically easy to work very hard on a climb even when one is on one’s own.

Another point he made relates to the psychological effects:

There is a tendency to show off a bit and newcomers often have to be taught not to surge when their turn on the front comes. There is a similar problem called “half-wheeling” that happens in a double pace-line, when there are two riders on the front side by side. There is a tendency to try to show that one is just that bit stronger than one’s neighbor and nose out by half a wheel. But these things are discouraged!

Anyone who does a lot of running with other people, of course, is familiar with the phenomenon of half-stepping (or one-stepping or two-stepping, depending on who you’re talking to and how bad the problem is). Which reminds me of this fantastic blog post honouring Olympic marathoner Brian Sell’s retirement.