This is a really interesting graph:

It comes from a study called the Copenhagen City Heart Study, which followed a random sample of about 12,000 people in Copenhagen for 21 years. This particular data (which was presented at the European Society of Cardiology conference last week) looked at the cycling habits of the subjects, teasing out the separate effects of how hard they typically cycle and how long they spend cycling on a typical day. What you see is that it’s all about intensity: men who typically cycled “fast” (as subjectively determined by self-report) lived 5.3 years longer than those who cycled “slow,” whereas duration had no significant effect.

Since this is just a conference presentation, I don’t have full details on the data and analysis. Obviously there are likely to be some correlations in action — people who are unhealthy for whatever reason are likely to cycle slower and die earlier. That being said, the results were corrected for “age, gender, number of other sports activities, BMI, systolic blood pressure (including antihypertensive medication), HDL-cholesterol, smoking, income, alcohol-intake and diabetes”. Here’s the comparable data for women: 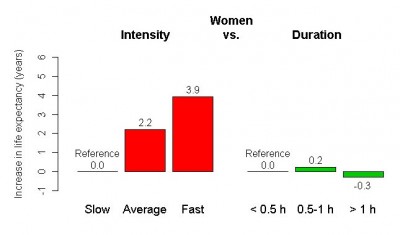 6 Replies to “Exercise intensity is more important than duration”