Last week I posted some data about my running cadence at difference running paces, which sparked plenty of interesting discussion here and at several other sites including Pete Larson’s Runblogger, Amby Burfoot’s Peak Performance and Brian Martin’s Running Technique Tips. All of those folks also sent me some data on their own cadence-vs-pace curves, so I just wanted to share the updated graph: 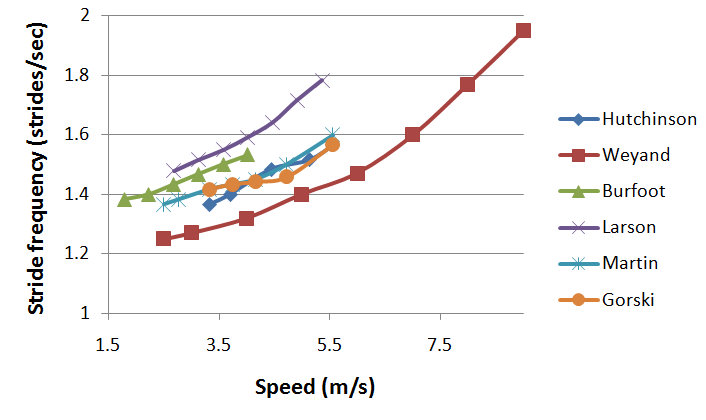 Without rehashing the whole discussion from last week, the key point I take away from this is that cadence changes as a function of pace (and in a fairly predictable manner, at that). The runners shown here vary dramatically in age, morphology, speed, running shoe preference, running style and probably many other parameters — and as a consequence, at any given pace they have different cadences.

Some might argue that, if all of us took a course to learn the “perfect” form, our cadences would converge toward similar values. That’s an interesting debate — but not the one I’m focused on here. Because even if we did all have the same cadence at 5:00/km, this data suggests very strongly to me that we’d have a faster cadence at 4:30/km, and an even faster cadence at 4:00/km. The moral: any discussion of cadence, whether of an individual or a group, is meaningless without implicitly or explicitly considering pace.